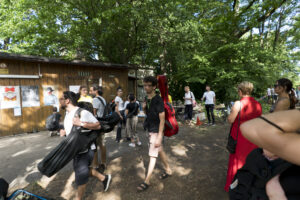 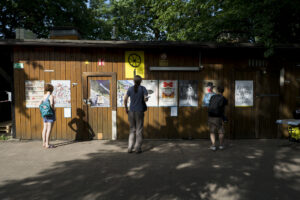 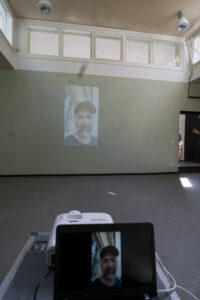 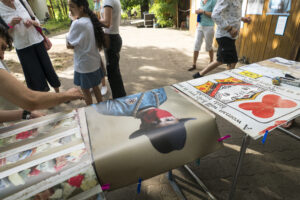 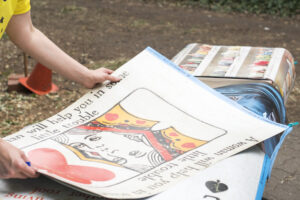 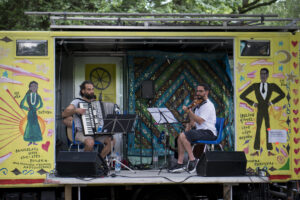 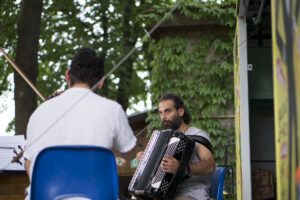 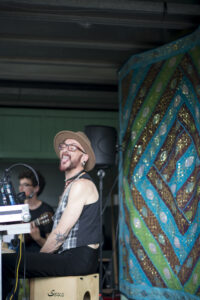 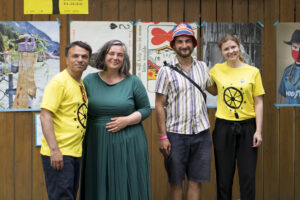 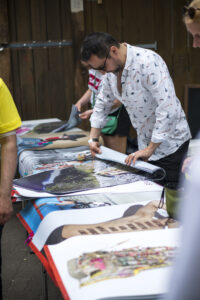 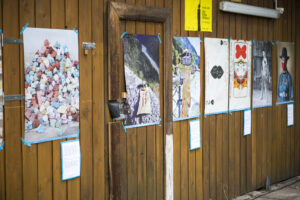 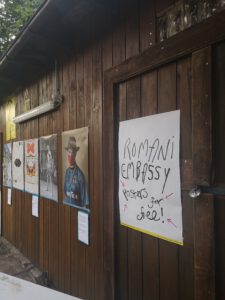 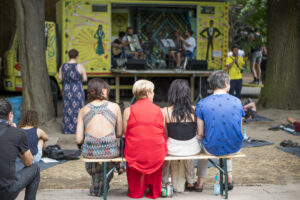 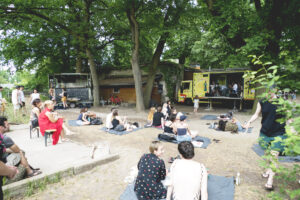 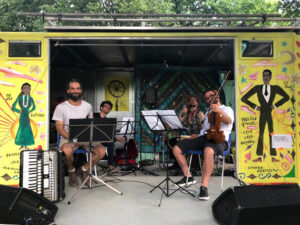 On the occasion of World Refugee Day, the self-organised art festival by and with Roma and BIPoC artists opens its third phase on the theme of survival.

The open-air event celebrates the strength and courage of people who have left their old lives, their loved ones and their own homes – to survive, to escape bombs and life-threatening conditions. In the midst of the (post-)migrant district of Neukölln, however, the question of survival after having fled also arises: at the latest after the right-wing terrorist attack in Hanau in February 2020, the danger to the lives of many racialised people in Germany became real.

Thus the centrepiece of the event and stage at the same time – the truck Captain Django Sastipe, specially designed for the 2nd Roma Biennale by Damian James Le Bas – bears the names of the people murdered in Hanau on its forehead. In addition to live music by Orphe Band, video artworks by Kristóf Horváth, Nathalie Anguezomo Mba Bikoro, Selma Selman and Charles Newland, among others, will be projected in the truck during the event, as well as artistic posters by Nihad Nino Pušija, Krzysztof Gill, Sead Kazanxhiu, Dan Turner, Jeffrey Wynne and Danyang Zhao. Under the motto “Art is not a luxury good, but a necessity”, posters can be taken away.

The neighbourhood campus Dammweg will serve as our space: a long-closed and enchanted wasteland that has been brought back to life by the Kulturnetzwerk Neukölln – from the initiative of Urbane Praxis, coordinated by Berlin Mondiale and in cooperation with S27 – Kunst und Bildung and Laial e.V.

World Migrants and Refugees Day is an international day proclaimed by the United Nations. It celebrates the strength and courage of people who have been forced to flee their home countries to escape conflict or persecution. Romani lives have also been linked to flight and displacement for centuries. Yet in the current mainstream political discourse, Roma are denied the status of refugees, labelled as “economic refugees” and accused of deliberately abusing the welfare system.

But those who come to Germany just to survive the winter and deliberately expose themselves to traumatising deportation are not calculating cheats, but people in need who have no chance of a dignified life in their country of origin because of racist discrimination. Being a refugee is not only about survival in the country of origin and during the flight. After arriving, refugees are exposed to exclusion and threats from the right.

At the latest After the right-wing terrorist attack in Hanau in February 2020, the question of survival after flight is becoming increasingly urgent in Germany.